In this post, I explore how terminals display color, a two-stage process involving ANSI escape codes and user-defined color schemes.

Terminals traditionally take an input of bytes and display them as white text on a black background. If the input contains specific “control characters,” then the terminal may alter certain display properties of the text, such as the color or font. Old terminals could only display a maximum of 8 colors. However, modern computer screens are capable of displaying 24-bit RGB color, so modern terminals have to implement a mapping of the 8 original colors to RGB values. This mapping can usually be changed according to user-defined color schemes.

The ANSI ASCII standard represents the escape ESC character by the decimal number 27 (33 in octal, 1B in hexadecimal). This is one of the control characters (0-31 and 127), not one of the printable characters (32-126).

The ANSI escape code standard, formally adopted as ISO/IEC 6429, defines a series of control sequences. Each control sequence begins with a Control Sequence Inducer (CSI), defined as an escape character followed immediately by a bracket: ESC[. In particular, a CSI followed by a certain number of “parameter bytes” (ASCII 0–9:;<=>?) then the letter m forms a control sequence known as a Select Graphic Rendition (SGR). If no parameter bytes are explicitly given, then it is assumed to be 0. SGR parameters can be chained together with a semicolon ; as the delimiter.

Some common SGR parameters are shown below:

The following diagram shows a complete example for rendering the word “text” in red with a single underline.

The role of terminal color schemes is to map the 8 colors to RGB values. Most terminals support an additional 8 colors corresponding to the bold or bright variants of the original colors. The GitHub repo mbadolato/iTerm2-Color-Schemes provides a sampling of common color schemes.

While the 8 standard color names are widely used within ANSI and ISO standards documents as well as the Linux community, Microsoft uses slightly different names and ordering of colors.

The command color sets the default console foreground and background colors, and it can also be used to list out the supported colors with color /?. The colors are named as follows:

Notably, Microsoft renames “cyan” to “aqua” and “magenta” to “purple,” and it names the bold/bright variant of black as “gray.” This ordering is also the ordering of colors that appear in the Windows Console settings. 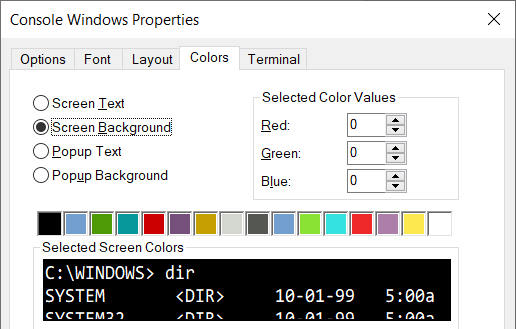 Windows Terminal now uses the ANSI color names except that it still uses “purple” instead of “magenta.” However, there is an open issue (as of March 28, 2020) where Microsoft seems to be considering “magenta.”

Personally, here is the color scheme that I’ve found to work well for me. It is largely based on Ubuntu’s default terminal color scheme (changes are marked by an asterisk *).